Within the first week of being elected Mayor, Todd Gloria took a massive salary spike and more than doubled his salary to $206,000 per year. He’s also gotten off to a fast start fighting against pension reform and other efficiency reforms to save taxpayers money. Mayor Todd Gloria has gone on a spending spree since becoming mayor.

San Diego working families are struggling to make ends meet, but Mayor Todd Gloria has repeatedly voted to increase our cost of living with increases in the cost of water, electricity, gas, and car registration fees – and backs massive increases in property, income, and sales taxes.

In 2017, Mayor Todd Gloria voted FOR the massive car and gas tax hikes that cost the average San Diego family more than $500 a year. Gloria then supported the Attorney General when he put a false title on the citizens’ initiative to repeal the gas tax in the November 2018 election.

In 2010, Mayor Todd Gloria voted for a massive sales tax increase in the middle of the Great Recession that disproportionately impacts the working poor because it is a regressive tax. Gloria threatened voters with closure of fire stations if they didn’t approve his tax hike. Voters disagreed, and other City Councilmembers intervened to lead the effort to reopen the fire stations.

Mayor Todd Gloria is continuing to make the cost of living HIGHER. We cannot afford his extreme policies.

On August 31, 2020 Mayor Todd Gloria voted for the controversial SB-145 law that significantly undermines the requirement for criminal sex offenders from having their name added to the State Sex Offender Registry list.

Mayor Todd Gloria’s SB-145 law allows a 24-year-old male who has sex with a minor boy or girl as young as 14 years of age to not be required to register as a sex offender.

Opposition to SB-145 includes law enforcement, survivors of child sexual assault and their families, as well as many Democrats.

Mayor Todd Gloria has a dangerous pattern of repeatedly siding with criminal sex offenders against the victims of their crimes and even allowed the City of San Diego to stop enforcement of a law banning sex offenders from living within 2000 feet of a school, playground or child care center.

Despite outrage expressed by law enforcement and survivors of child sexual assault regarding his position on this issue, Mayor Todd Gloria continues to champion SB-145 and claims this law is designed to “end discrimination” against the sex offenders.

In 2019, Mayor Todd Gloria voted for AB-5 – a law that bans the hiring of independent contractors in California except under the most extreme conditions.

AB-5 has devastated tens of thousands of San Diegans who rely on jobs and income from self-employment to make ends meet. Recent studies have identified more than 1 million jobs put at risk statewide by AB-5.

Mayor Todd Gloria has a pattern of voting for laws that increase the cost of creating jobs in California. At a time when the economy is struggling in the pandemic, Todd Gloria will make it harder for San Diegans to find work.

Say NO to Mayor Todd Gloria.
Too Extreme for San Diego 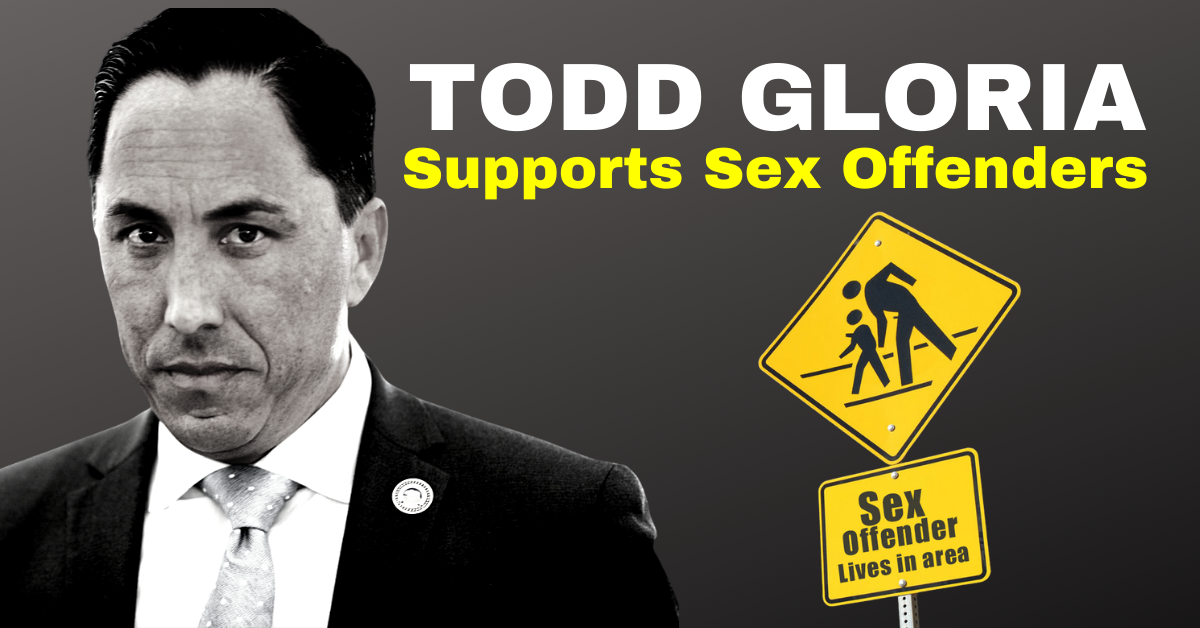